Interview by TV Program “The WELL” 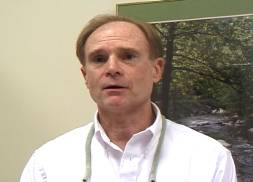 I am a 56-year-old neurologist who has been in excellent health. Several months ago I had a mole removed from my left arm. The pathology report indicated that it was a malignant melanoma. This is known to be a very aggressive cancer which metastasizes early both locally and systemically. Studies have thoroughly investigated which patients require more extensive evaluation and treatment. The main determining factor is the thickness of the primary lesion. Because mine was quite thin, I was told that it was of little consequence, should have minimal impact on my longevity, and required no further evaluation or treatment. Normally, a strong healthy immune system destroys or contains developing cancers easily.

I knew that I had a very stressful job and was working too hard, chronically sleep-deprived, and frustrated and unhappy. And I knew this was negatively affecting my immune system. When I originally learned the mole was a melanoma, it was naturally very unpleasant news. But, ironically, I was really too busy to think about it very much.

However within two months a small nodule appeared above the area where the mole had been removed. Because the dermatologist did not feel this was at all likely to be cancerous, he only did a tiny punch biopsy, and made no attempt to cut out the entire process. Unfortunately, this biopsy showed malignant melanoma also. The dermatologist, two medical oncologists, and two surgical oncologists all expressed surprise that such a thin melanoma would be associated with a metastasis so soon.  But, despite being in shock at the realization that I now had a life-threatening illness, I cannot say that I shared these doctors’ surprise. I had known for many months with the utmost certainty that this job stress would destroy my health if I did not take action soon. My only surprise was how rapidly my prediction had come true.

The advice of the surgical and medical oncologists was to remove all the lymph nodes from my armpit as well as to remove large pieces of tissue from around the primary site and around the area where the cancerous lymph node had been removed.

I had a strong interest in the mind-body connection for many years. The official branch of science which formally studies this mind-body connection is called Psychoneuroimmunology. The term refers to the relationship between the mind  (psyche) and the immune system via the intermediary of the brain (neuro). A great deal of detail is now known about the exact mechanisms by which chronic stress, anger, and depression weaken the immune system. Conversely, forward thinking physicians like Deepak Chopra have written excellent books about ways that we can also positively influence the immune system with our minds.  While the details of how thoughts influence emotions and then the immune system are being discovered, there remains this conceptual problem: how does a thought, which would certainly seem to be primarily energy rather than matter, become transformed into the matter of immune molecules of lymphocytes, antibodies, natural killer cells, and so forth? In other words, how can pure energy become transformed into pure matter? The answer is that we do not know how this occurs but the fact that it does occur has been clearly explained by Einstein’s theory of relativity, in which E=MC squared (Energy=Matter multiplied by the speed of light squared). The discipline which studies this relationship between matter and energy is called Quantum Physics and a great deal has been written about this energy conversion to matter.

Because of the poor prognosis using solely conventional therapies, I determined that I would explore multiple other avenues. My wife had read an article in the paper about a local Qi Gong practitioner named Master Shen Wu who has developed a system called Music Qi Gong.

I had been interested in Qi Gong (or Chi Gong) for a long time since discovering a book called Encounters with Chi, by David Eisenberg M.D. I knew that this ancient system of exercises had been used by the Chinese for thousands of years to optimize their intrinsic energy levels and health. Via specific exercises designed to influence the energy field of the body, the physical body itself is affected. I had also heard that Chi Gong masters (expert practitioners of these energy exercises) could project this energy onto external objects, including other human beings. This energy has been used as a healing modality in China for thousands of years. It seems to be less well known than acupuncture, though both modalities are based on manipulation of the flow of chi through the energy channels, or meridians, of the body. Master Wu himself has demonstrated his ability to retard the growth of cancer both in the laboratory under controlled conditions and in patients who have cancer. One mechanism by which this occurs appears to be through the increased production of Natural Killer Cells. Therefore, in Qi Gong, we have another example of how pure energy which which has no form or substance can be transformed into matter.

As a neurologist, I wondered if there were specific regions in the nervous system that were activated by these exercises and treatments to result in improved immune function. I also knew that sound has a profound influence on the nervous system. Music has been called the universal language. I like the old expression “music has charms to sooth the savage beast”. In traditional Chinese medicine as well as in the Ayurvedic tradition of India, specific tones have long been regarded as having healing properties. So naturally I was very interested to meet someone who combines chi gong with music to treat cancer and other types of medical illnesses.

When I learned about the metastasis, I was initially in shock.  It was difficult to think clearly. I was told that with the best available therapy I had a 50 percent chance of living another five years. I was very scared and depressed. I knew that the available medical treatments were toxic and not very effective. I was also convinced that the chronic stress and frustration of my job had greatly weakened my immune system. I was confident that if I had been relaxed, rested, and happy, the metastasis would never have happened.

I felt that what I needed most was something that would restore a sense of control over my life. I wanted to have something specific that I could do that would mobilize my intrinsic healing abilities. When I met Master Wu I was impressed that he was very sincere and enthusiastic about the ability of his therapy to help cancer patients. I saw videotaped testimony by other physicians who treat cancer and the patients with cancer who had benefited from his therapy. Master Wu emphasized the importance of positive thinking and confidence in my ability to overcome this obstacle.

I was determined to use both conventional therapy including surgery and chemotherapy as well as alternative medical approaches such as Qi Gong. Master Wu told me that he strongly recommended against surgery and chemotherapy because they would weaken the immune system. I knew he was right about that but I was afraid to turn my back on these conventional therapies when faced with a deadly illness. Therefore it was difficult for me to relax during the first treatment session as I pondered the possible consequences of abandonment of mainstream therapies. However, by the second session, I felt more comfortable and became very relaxed as I listened to his wonderful music. During some of the subsequent sessions, I could feel electric shock sensations or brief tingling or itching in various areas. The night after the second session, I was awakened by a sudden brief buzzing sound which I had never experienced before. Sometimes, during the treatments, I could hear the “anahata nada” which I hear during meditation. Gradually as I began to do the exercises he prescribed, I felt more relaxed and confident that I was doing the right thing to build up my strength to fight this disease. Despite my anxiety, I began to sleep better.

However, I gradually developed soreness in my left armpit and chest and began to fear that this meant the cancer was spreading to the lymph nodes in that area. Therefore, despite Master Wu’s advice to avoid surgery I went ahead and scheduled the surgery that I had been advised to have. This was done after several weeks of Master Wu’s therapy. The biopsy results showed that there was no residual cancer whatsoever in the lymph nodes or tissues of my arm. In retrospect, I firmly believe that this soreness I was feeling was the result of Master Wu’s stimulation of my lymph nodes to fight the cancer.

Another interesting observation was the fact that I developed a sinus infection after surgery. I had this for seven days and mentioned it to Master Wu. He worked specifically on this infection during one session and immediately after that the infection was completely gone without the use of antibiotics.

So it turns out that Master Wu was right- I did not need the surgery. However, the positive effect of having my surgery is that I am now confident of the effectiveness of this treatment program. I have proof that there is no further cancer in the arm. I believe that the absence of any residual cancer found at the time of surgery was directly related to Master Wu’s treatments.

Master Wu has spent a great deal of time with me explaining the philosophy behind traditional Chinese medicine and Qi Gong, and the relationship between the energy body and the physical body. He has given me frequent words of encouragement and reminders to avoid worry and negative thoughts. As a result of all of this, and his treatments and my exercises, I now feel confident that my chances for long-term survival of this disease exceed 95 percent. This confidence is one of the most important ingredients for continued success, as it is one of the most powerful methods for my mind to stimulate my immune system.  When I first went to see him, I was depressed and quite tired and discouraged. I am eternally grateful to him for the fact that my energy is now much higher and I feel strong and optimistic about the future.